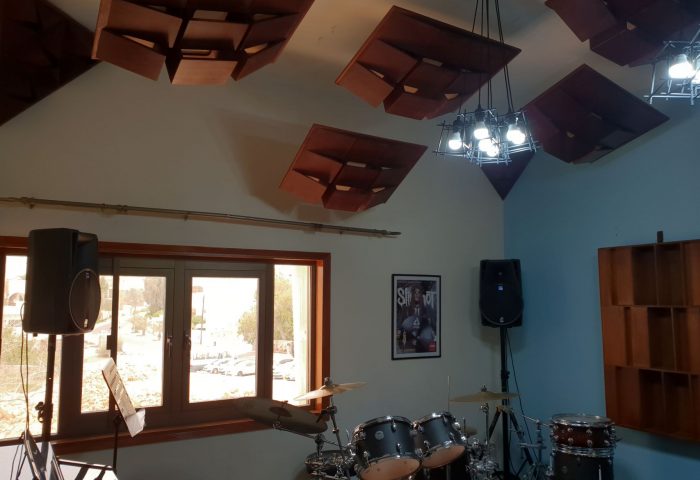 Our first project for the design and build format. We measured the impulse response of the room to understand the issues faced in the room.

The primary issue faced was the acoustic “ringing” in the room. This can be attributed to parallel flat walls and ceilings of the room. The flat ceiling could be giving rise to strong modes in the room which would take longer to decay, hence the “ringing”. When analyzing the reverberation times taken over multiple points in the room, it was evident that there were large variations in the decay times for the lower frequency bands, which is common for a room for this size with higher than usual reverberation times (schroeder frequency effect). However one particular 1/3rd octave band (100Hz) showed a significantly higher decay time than it’s adjacent bands, given there was no low frequency absorber in the room. Under close inspection it became evident that this abnormally high value is due to the ceiling height (2.98m) which closely relates to the wavelengths in the 100Hz 1/3rd octave band (Frequency corresponding to 2.98m ~115Hz ). Along with this, even the resonant frequency of a kick drum falls within that range therefore it is possible that the kick drum also contributed to the ringing effect. In a room that is used primarily for percussion, this was going to be problematic with just the kick drums being unclear. The room was also used as a practice room with other instruments and sometimes for recording as well.

There was also an issue of noise complaints regarding the drum room. This also meant that there was significant noise intrusion from the school nearby and flights passing above the school. The noise level was in the range of 50-60dB when there was a flight passing over or if there were cars passing over the gutter with metal gratings. This means that if they were to use the room for recording, they can only do it when there was no traffic, which was at night, at which time practicing in the room would be very much audible to the neighbors. This would be even louder if a whole band was practicing together in the room. Also, the students in the room would have to play louder when there was a lot of noise coming in when there is a flight passing above the school.

We provided corner bass traps with pyramid shaped protrusions to reflect the higher frequency sounds. These were placed at the 4 corners of the room where there is highest concentration of low frequency modes, giving us higher efficiency for low frequency absorption. 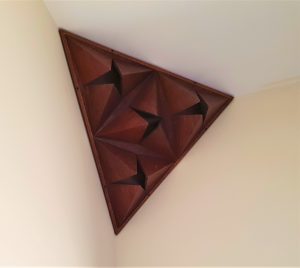 Panels to act as a canopy to direct sound from the drums to be directed towards the front of the room, while the overall curved profile would act as a diffuser. While the panels angled and hung at fixed depths from the ceiling would be transparent to the lower frequencies passing through the panel and the cloth underneath, giving us mild absorption in the lower frequencies. 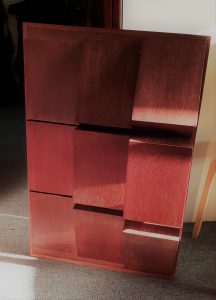 Along with these two panels, we provided 3 nos of 3D diffusers approximately in line with the cymbals. These diffusers were made using blocks of small sizes (~4-5cm) therfore these would be effective diffusers in the mid to high frequencies.

The client had requested to seal off one window instead of replacing it. We sealed off the window and placed a Quadratic residue diffuser in its place, the sizes of the wells and depths were suited to target the mid frequencies. Placing the diffuser on a large flat wall covering a significant area (2.4m x 1.2m) would diffuse the sound effectively, especially from the snare and toms. The 3 layers has different sequences to increase the frequency range of the diffuser. 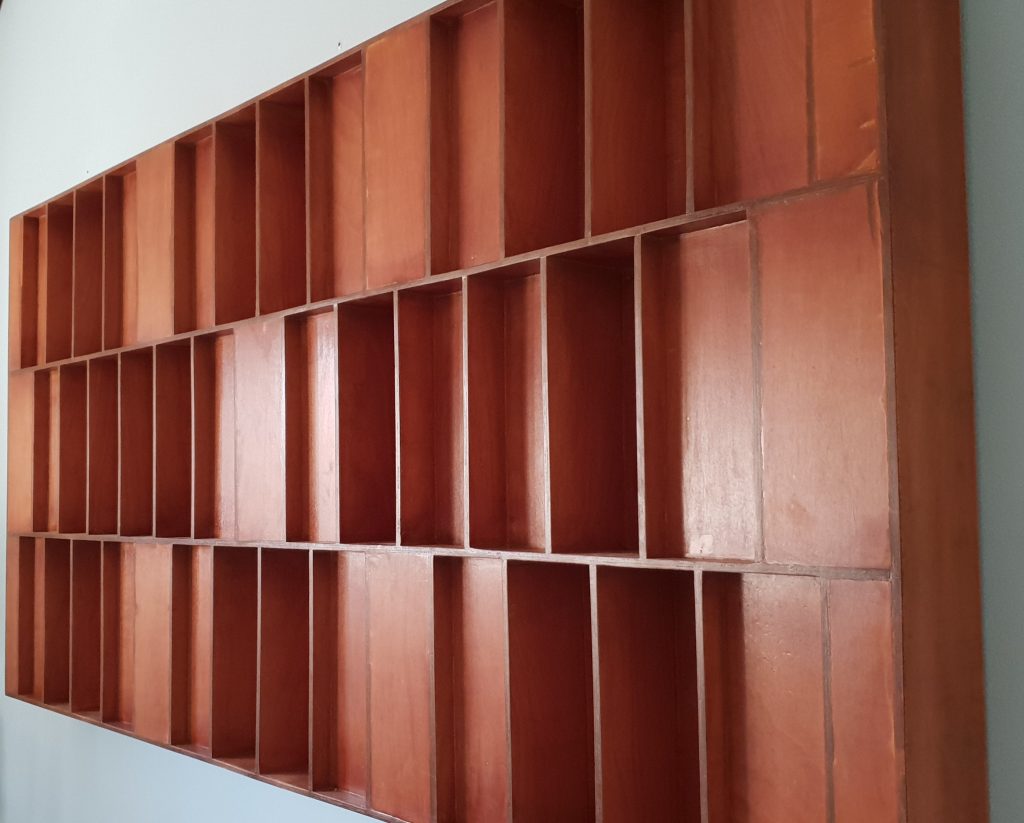 Additionally a platform/stage was made to raise the drums from the floor to reduce isolate the drums further and passing structural vibrations from the kick drums.

The results from before and after treatment are given below.

Final pictures taken after the room was furnished again and used for teaching. 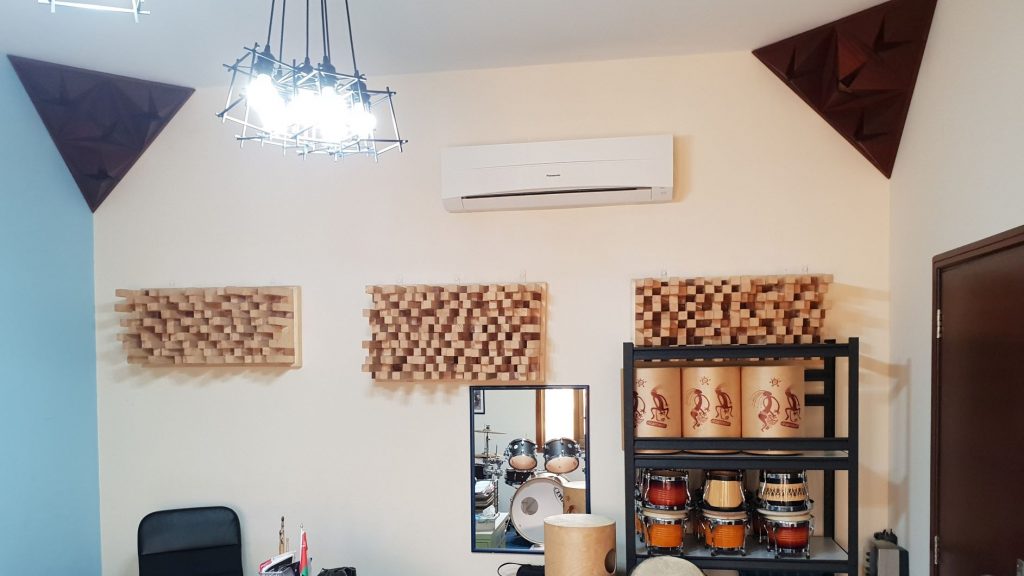 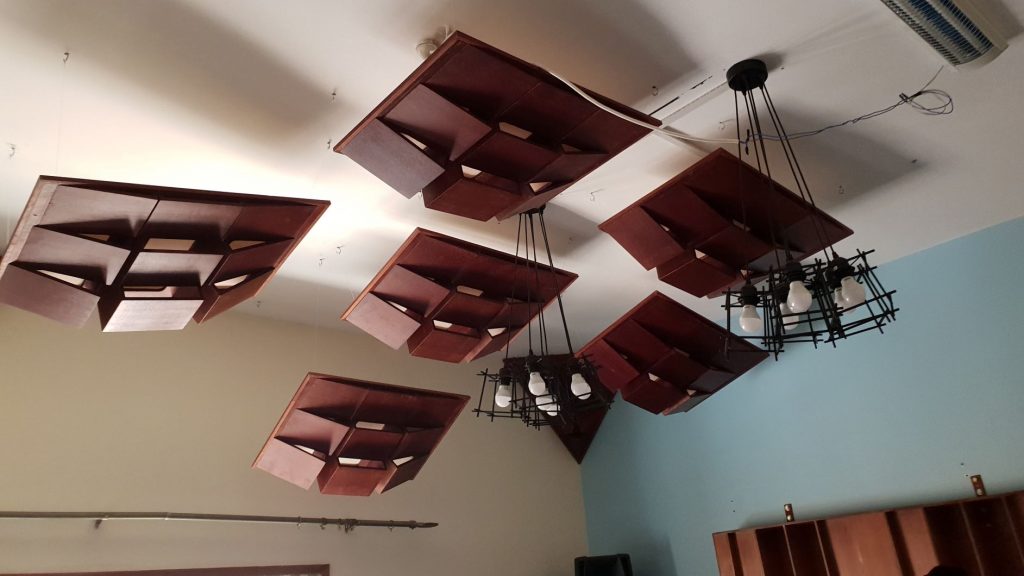 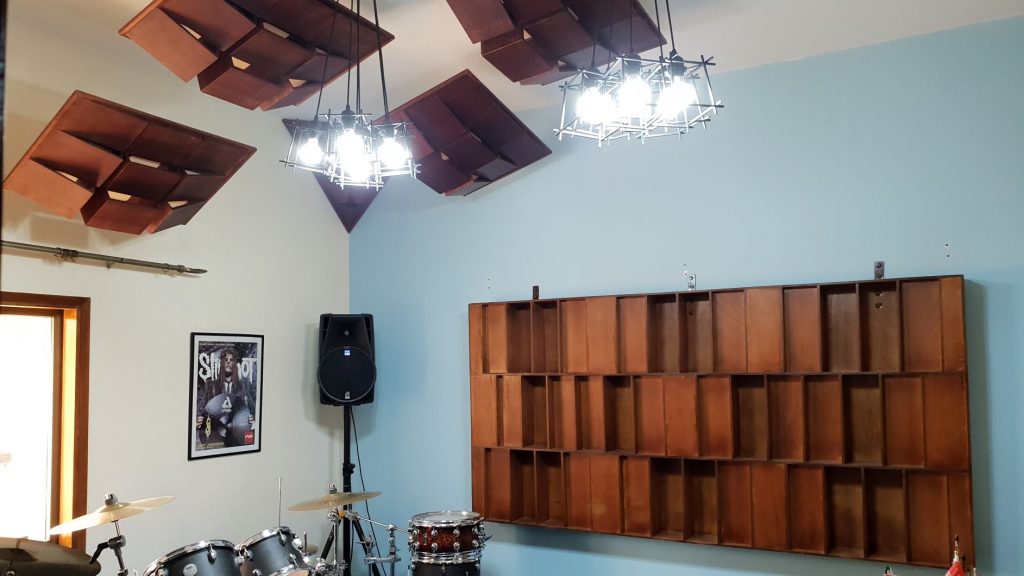 We have managed to make the room quieter and easier to play, the noise levels outside the building when drums were played were lower than noise levels from cars passing by. The ringing effect was also not audible any more. It is in our opinion that this room would be very suitable for tracking drums along with closed micing + overheads and due to the good acoustics in the room a “room mic” placed in front and near the teachers table would only add more tone to the mix. The areas where parallel reflections are possible has been reduced greatly. As our first challenging project, we’d like to sincerely thank M/s Tunes trading and services for giving us an opportunity and for their willingness to accept innovative solutions to treat the acoustics in their room. All Acoustic absorption and diffusion panels were custom designed and built in the Muscat, Sultanate of Oman.