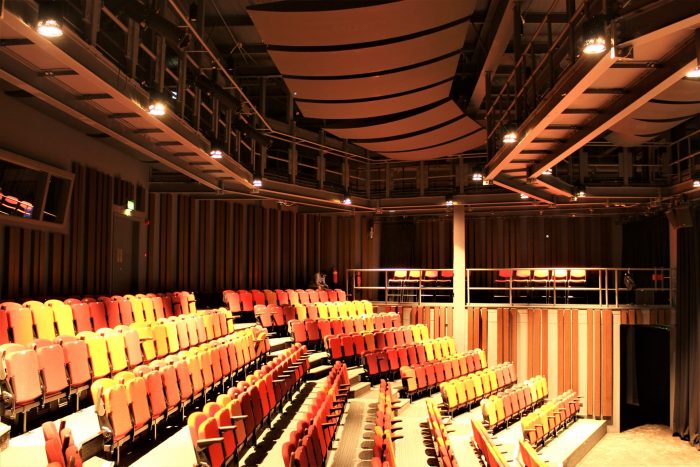 This was our most satisfying project in 2019. We were hired by the school during construction of the project, to evaluate the acoustic design as was planned and “diagnose” any issues. We made a model of the hall based on the acoustic treatment scheme as was planned and simulation using University of Edinburgh Acoustics department’s Roomerical tool. 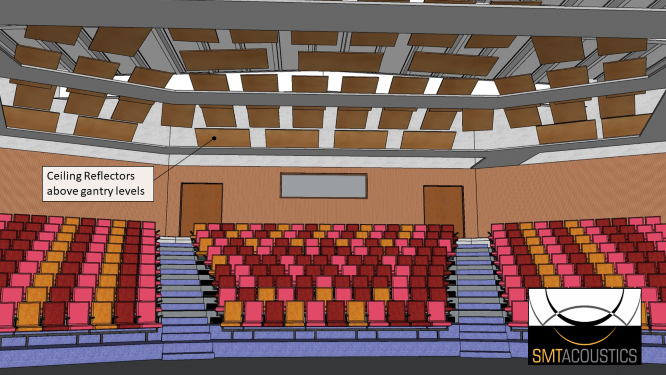 Flutter echoes have “come out”.

An amazing tool by UOE Acoustics department allowing us to identify these issues. This proved to us as that adding additional absorbers will only make things worse. When the reverberation times was longer, flutter echoes get drowned out with other reflections and wasn’t as evident. Such flutter echoes, which usually come within ~1-3kHz is very evident and can have a disturbing effect on sound, apart from the serious comb filtering that occurs. It was clear that adding more absorption will only drop the RT, which wouldn’t be ideal for a performance space that we were working on.

As per relevant standards and practice, having long RT is preferred for music, whereas it is preferable to have lower RT for speech and communication – to have better intelligibility. At the same time, occupancy plays a big role in absorption in halls. While the upholstered seats help greatly by providing similar absorption when unoccupied, it does not account for other factors which affect sound – diffraction and other losses due to our head and shoulders – which drop the RT more when occupied.

When the RT is really low, it can be uncomfortable for our ears and it can lead to occupants feeling “stuffy”. The reverberation time should “match” with the volume of the space for our ears to feel it is natural. In short, adding absorbers in a large hall is not a blanket solution for treating acoustical problems. The reverberation and acoustics of the hall should match the requirement of the hall as well as the acoustical comfort of it’s occupants.

The solution to maintain RT while still break up flutter echoes? Acoustic diffusers.

Acoustic diffusion is an elusive subject largely overlooked in normal projects given the complexity and cost of it’s manufacture. While it’s benefits are not as noticeable as absorbers. It is employed mostly in projects focused entirely on music production or performance – such as concert halls and recording studios.

Given the space we were designing for is a working studio and drama theater, with lot of movement of students, putting complicated 2D diffusers to break some echoes sees counter intuitive. Keeping this in mind, we designed a solution to have a compromise between diffusion and work-ability – large scale diffusers. We designed “boxes” of varying depths and sizes placed at regular intervals to form a large scale “inverted” quadratic residue diffuser. This could possibly serve our purpose and provide us a smoother response which would solve our issue. 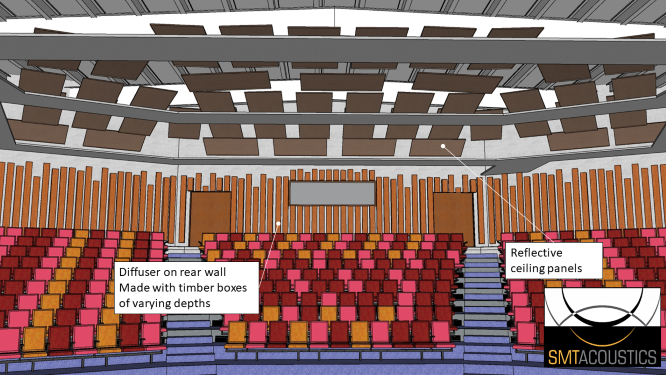 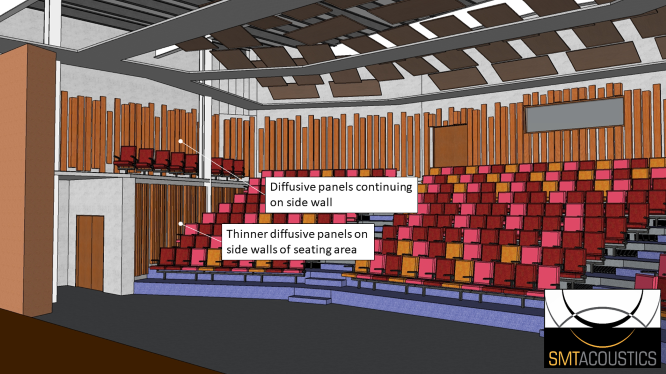 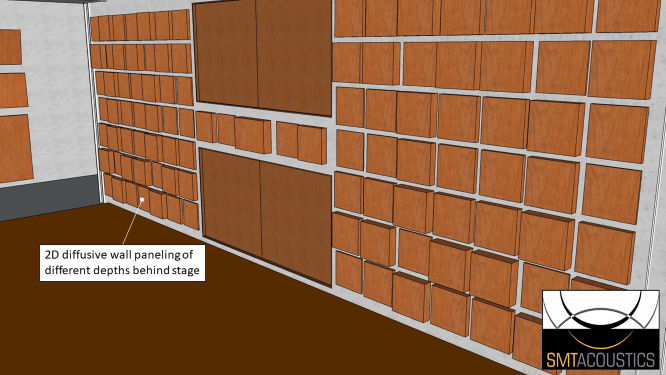 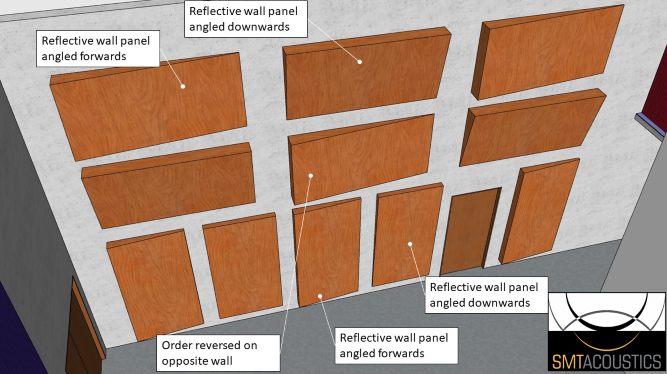 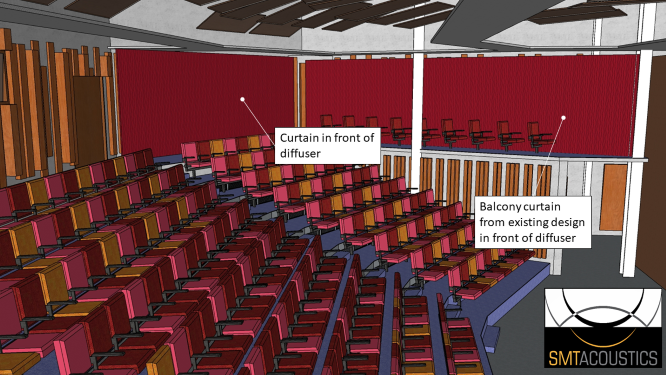 This model was simulated for the same source and listener positions as the previous model to get the response. Diffusers with some absorber in front work as a very efficient absorber. So it would be ideal to use the curtains in the original design along with the diffusers to achieve some variable reverberation times as well. The response from our revised design can be seen below.

We saw that as per our simulations, we were able to break the strong specular reflections in the first simulation, as well as the flutter echoes in the second simulation by employing our “simple” diffuser design! (comparatively simple at least). We saw a more even decay of sound without any flutter echoes. The theater specialists, the architect and school agreed to employ some of our solutions to improve the acoustics of the hall. With the possibility of installing the canopy panels as proposed at a later stage.

Upon completion of the project by the contractors, we carried out post completion tests. We carried out noise measurements and reverberation time tests which identified some issues and flutter in specific areas which could be solved by installing canopy panels and a barrier panel. Additionally, we also carried out some sound insulation performance tests to ascertain the performance of hinged move-able partitions installed behind the stage.

We (SMT Acoustics) designed and manufactured curved canopy panels and the barrier panel locally in Muscat, Oman which were installed in the theater during one of the holidays. The curved canopy panels eliminated the flutter echoes altogether. The canopy panels also increased reinforcement from the ceiling. The sound from the stage, from a person or an instrument which would have otherwise got “lost” in the ceiling was directed back towards the audience providing more reinforcement and improving the “strength” of the sound. This would allow the audience to hear the sound from stage better without having to rely entirely on the PA system to provide all the amplification. Adding large canopy panels also has the benefit of breaking up some floor-ceiling modes and providing a smoother reverberation time in lower octave bands (125Hz, 250Hz).

The canopy panels were of varying sizes, from the smallest one being 1.2m x 1.2m to the largest one being 3.15m x 1.2m. There were both longitudinally and axially curved panels with a fixed curve depth of ~25cm, suspended from the ceiling at specific depths and angles calculated to direct all the sound from the stage towards the audience. These were painted matte black and installed above the lights, so they would go largely unnoticed by the audience but provide all the benefits of reinforcement from the ceiling. 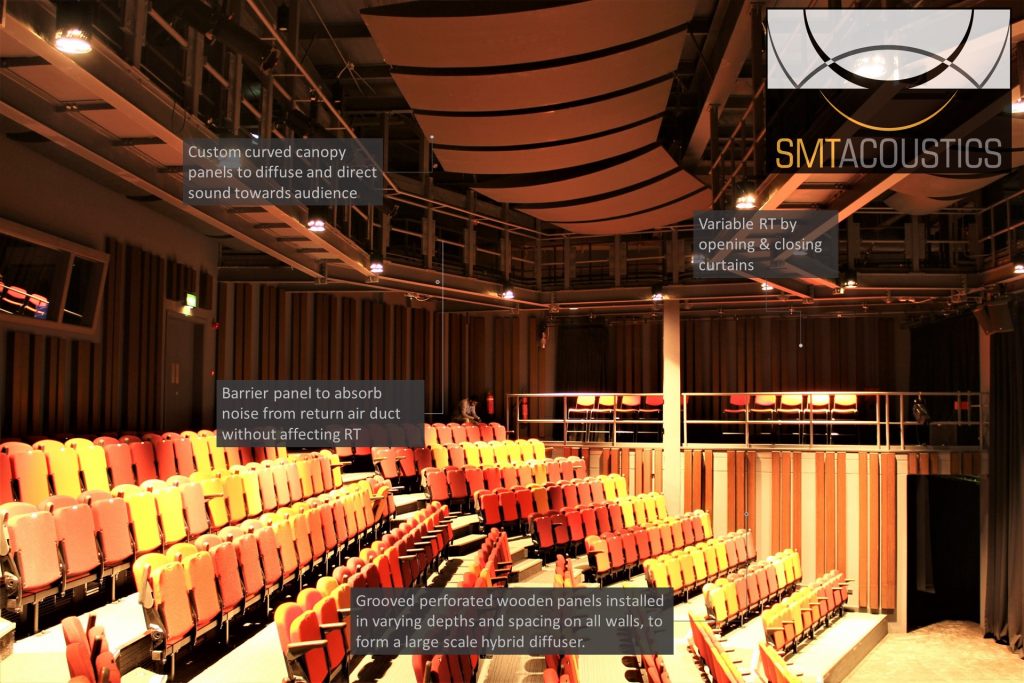 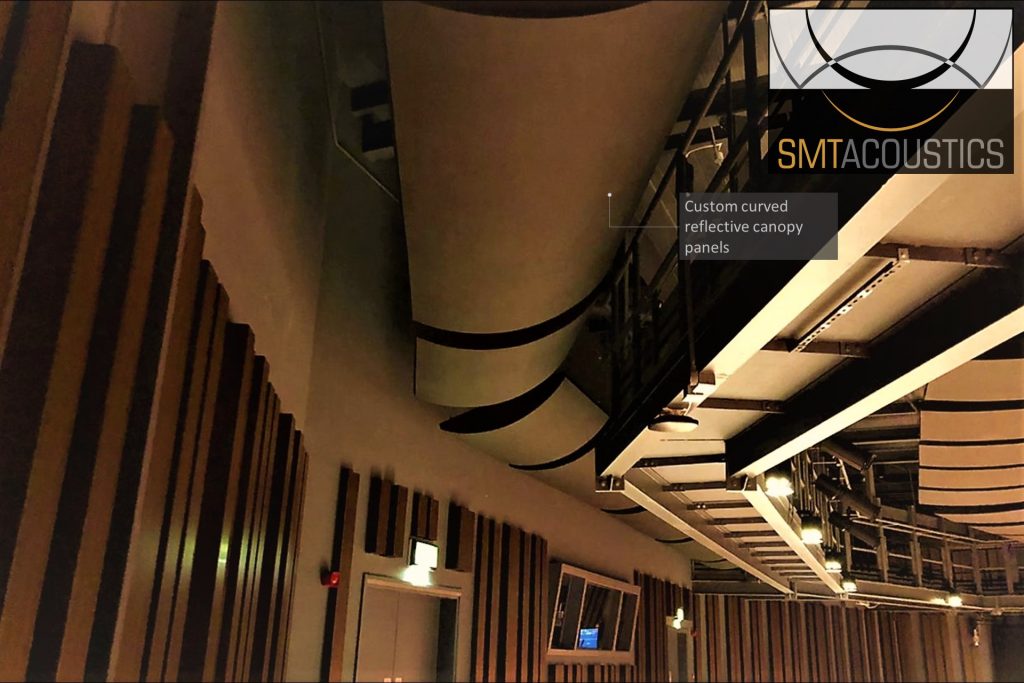 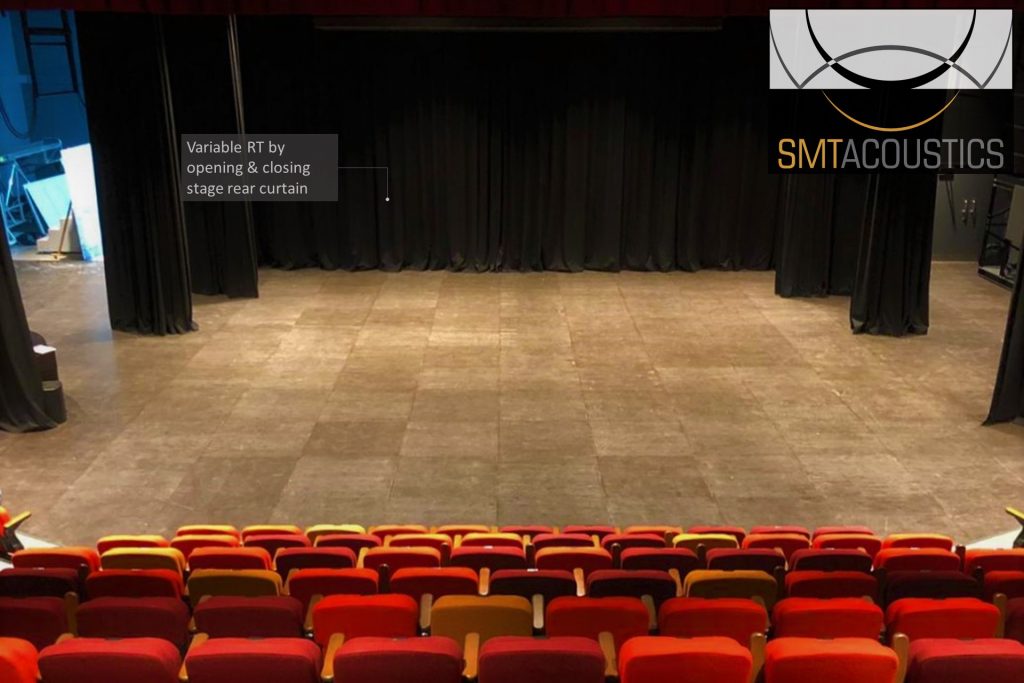 Here is some cool pictures of the completed hall! We designed the hybrid panels along the walls during the construction stage, and installed the canopy panels after handover. Easily one of the prettiest project’s we were involved in! 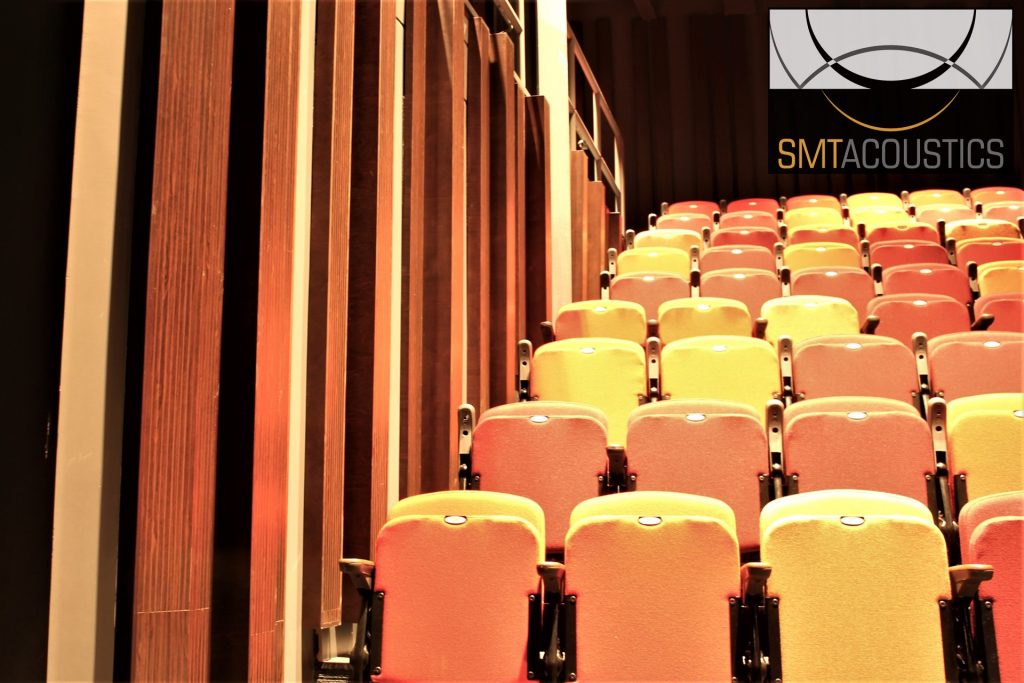 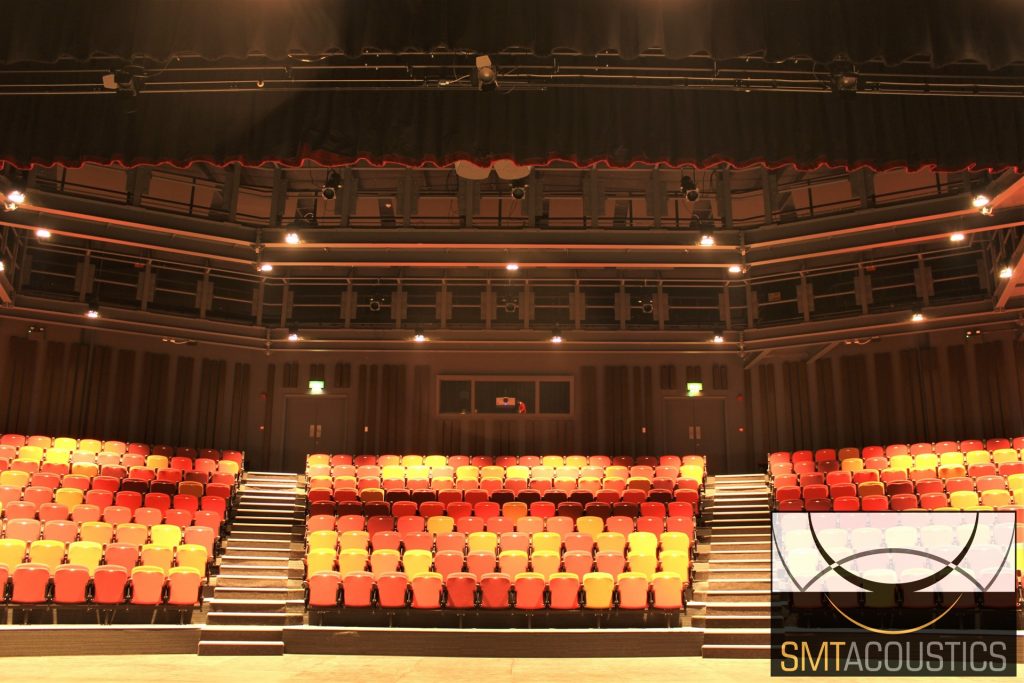 We are absolutely proud about our involvement in this project and thank the school and project team is believing in us and taking up our solutions for acoustic treatment. The hall provides some world class acoustics suitable for speech performances (drama/debates/speeches) as well as musical performances! The RT can be varied slightly (~0.2s) by opening and closing curtains. An absolutely satisfying project for us to show case what can be achieved by including acoustic study during the initial stages! This was also our first large project where we got to employ diffusers into the solutions apart from our very first installation project.

Thank you for taking your time to read through our page! You could say, their acoustical issues have been… diffused.